With newly detailed face and skin paintwork comes a figma of Guts from “Berserk” in a special Band of the Hawk version! 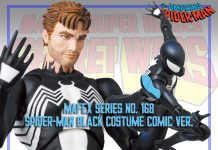 ABOUT US
Rio X Teir is a place for any informations and news daily dedicated to all of the readers include you also. This site will provide materials such as Gundam, Kamen Rider, One Piece, and many others in form of action figures, pvc figures, model kit, and other types of toys.
FOLLOW US
© 2018 - Rio X Teir
MORE STORIES